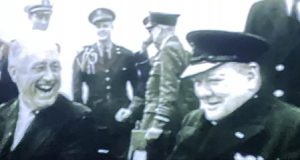 Mr Churchill and Mr Roosevelt enjoying humour at the height of WWII. Churchill apparently could be quite an amusing fellow. Here it looks like FDR is having a good belly laugh. Was it a somewhat risqué joke?

The two men never got on well with each other; they were very different personalities. Comparatively straight-laced apart from his affairs outside wedlock, Roosevelt was a seasoned politician in the American way, elected president on the Democrats’ ticket, while Churchill was an oft-pompous and class ridden Englishman in the age of Empire. 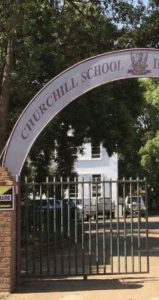 Churchill School in Harare for boys was renowned for producing great cricketers. At the beginning of his reign Robert Mugabe said: “Cricket civilises people and creates good gentlemen. I want everyone to play cricket in Zimbabwe. I want ours to be a nation of gentlemen.”

But that’s all gone now. Mugabe’s anglophile love of cricket was soon to disappear in favour of political dogma and the ensuing corruption by cricket’s new administrators..

Roosevelt School for girls, just across the road, shared sports fields with Churchill. Both government high schools started out being held in high regard.

Post-colonial Africa changes names given by the colonisers. Tongogara, after the liberation war hero, was proposed for Churchill and Marumbi for Roosevelt. But opposition came from generations of former pupils who bequeathed long standing funding for schools development. Some name changes went into abeyance as a result.

Sally Mugabe in another part of the capital is still popularly known as Queen Elizabeth school for girls. In implemented street name changes Liberation Legacy Way, quite a mouthful, remains the Borrowdale Road in everyday speech.

As Mr Churchill once said: ”History is written by the victors.” Which is why David Livingstone has been described here as the first white tourist to Mosi-o-Tunya, the smoke that thunders or the British Queen’s “Victoria Falls.” 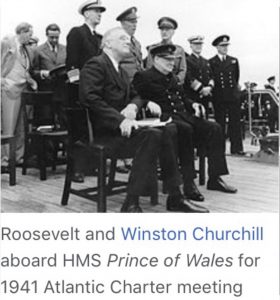 In the schools that bear their names it is scarcely raised that both held talks with then-allies Stalin and the Chinese boss man of the time Chiang-Kai-Shek. “Courage,” said Churchill, “is what it takes to stand up and speak. Courage is also what it takes to sit down and listen.”

Roosevelt, wheelchair-bound from polio, swiftly put America into WWII after the devastating Japanese attack on Pearl Harbour in 1941 put paid to American procrastination on committing to the war.

In legend, Churchill, like him or hate him, drank a lot. To him “gentlemen make drinking a pleasure, reach contentment before capacity and whatever they drink they can take it, hold it and still remain gentlemen.”

Sadly, Zimbabwe never got the gentlemen Mr Mugabe once had wanted.