If you saw my offering on schools in Zimbabwe, here are some of Winston Churchill’s quotations, wisdoms or otherwise that pupils at Churchill School might enjoy. (Sources credit:everywhere.) 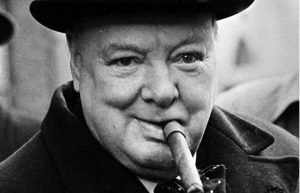 I am fond of pigs. Dogs look up to us, cats look down on us, pigs treat us as equals.

An appeaser is one who feeds a crocodile, hoping it will eat him last.

If you have an important point to make, don’t try to be subtle or clever. Hit the point once. Use a pile driver. Then come back and hit it again. Then hit it a third time – a tremendous whack.

A prisoner of war is someone who tries to kill you, fails then asks you not to kill him.

Tact is the ability to tell someone to go to hell in such a way that they look foreword to the trip.

For a nation to tax itself into prosperity is like a man standing in a bucket and trying to lift himself up by the handle.

Never in the field of human conflict has so much been owed by so many to so few. (On the victorious Battle of Britain air war July-October 1940 against Germany’s greatly superior air force, the Luftwaffe, which lost 1,700 planes.)

Ending a sentence with a preposition is something up with which I will not put.

Sir, you are drunk! “Yes madam but tomorrow I will be sober and you will still be ugly.”

Lady (Nancy) Astor: If I was your wife I’d put poison in your coffee. “Nancy, if I was your husband I’d drink it.”