With all that’s going on in the world today, it might be time to look at peculiarities, the off-beat and the humour prevailing in past and present times. 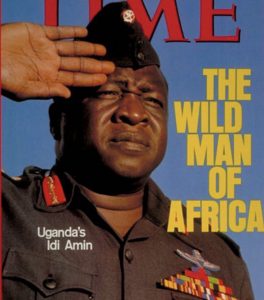 Exactly 50 years ago Ugandan dictator Idi Amin expelled tens of thousands of Asians from the country. They were bloodsuckers in the economy, according to him. As soon as all but a handful had gone the economy bled out right royally. Senior government people and army loyalists got, among other things, the Asian shops.

What wasn’t fully understood was that stock on the shelves had to be replenished once sold. Most of the shops soon went bust. The expelled shopkeepers started new businesses all over the world where they thrived.

Ranking British politician Priti Patel left Uganda with her family as a toddler. She masterminded the recent plan to send batches of the UK’s illegal immigrants to Rwanda, Uganda’s neighbour. Whether Syrian and Afghan fugitives can acclimatise to Africa as well as Priti Patel’s forbears did is still open to question.

How did the Asians make it to Africa in the first place? In part, it was to build the the first railways. They stayed on and many more followed to make the most of their mercantile skills in Africa in the raw.

“Colonel John Henry Patterson tried to induce the natives to work on the East African railway but, despite the great famine in 1897–99, found that they were indifferent to money and impervious to the advantages of work. Patterson would leave a hurricane lamp burning at night outside his camp. The native, he said, would approach, work for a few days until his curiosity was satisfied and then disappear. The British brought 35,000 ‘coolies’ from Asia to build the Lunatic Line from the Indian Ocean to Uganda.

“Winston Churchill described the fertile land of Uganda as a jewel in the crown of the Empire, reached by the Jack and Jill beanstalk of the East African railway climbing up from the Indian Ocean. So fertile was Uganda, you could put a walking stick into the ground and it would grow, he said.

Along the railway to Uganda, the lions of Tsavo developed a taste for those building and maintaining it. Once a lion eats a human, it becomes a rogue lion that always goes back for more, having found a delicacy of more flavour and one much easier to catch than its usual prey of impala, wildebeest and zebra.”

One of the Asians wrote about it thus…

“I, Roshan, came to this country of Africa,

and did find it indeed a strange land;

many rocks, mountains and dense forests

abounding in lions and leopards;

elephants, deer, camels and all enemies of man …

Now from the town of Mombasa,

a railway line extends into Uganda.

In the forests bordering this line there are

Day and night, and hundreds of men fell victims

to these savage creatures whose very jaws were

Bones, flesh, skin and blood, they

devoured all and left no a trace behind them …

The lions’ roar was such that the very

earth would tremble at the sound…and where was the

man who did not feel afraid?

On all sides arose weeping and wailing and the

And now I will relate the story of the engineer

in charge of the line:

And after seeing what the animals had done,

the Englishman spoke, and said,

“For this damage the lion shall pay with his life.”

Patterson Sahib is indeed a brave and valiant man

— from The Man-Eaters of Tsavo and Other East African Adventures by Lieut.-Col. J. H. Patterson: